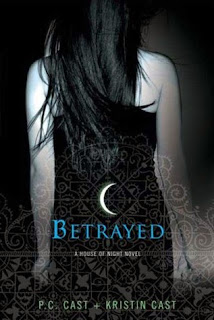 Goodreads Review : Fledgling vampyre Zoey Redbird has managed to settle in at the House of Night.  She's come to terms with the vast powers the vampyre goddess, Nyx, has given her, and is getting a handle on being the new Leader of the Dark Daughters. Best of all, Zoey finally feels like she belongs--like she really fits in. She actually has a boyfriend…or two. Then the unthinkable happens: Human teenagers are being killed, and all the evidence points to the House of Night. While danger stalks the humans from Zoey's old life, she begins to realize that the very powers that make her so unique might also threaten those she loves. Then, when she needs her new friends the most, death strikes the House of Night, and Zoey must find the courage to face a betrayal that could break her heart, her soul, and jeopardize the very fabric of her world.

My Review : This is the second book in the House of Night series. The first book was okay, it made me a little angry but it reminded me of Harry Potter so I decided to continue reading this series. Big mistake.
In this book Zoey is all settled, she is the new "queen" of the school since she became the leader of the Dark Daughters. On the outside, humans are being killed and the House of Night is blamed. Zoey makes it her mission to solve this mystery.
So in this book Zoey has 3 boyfriends. I love love-triangles, but having 3 boyfriends is just a little too much. There has to be a point where she needs to make up her mind. What made me mad the most, is that basically she was calling other people sluts and other names while she was probably the biggest one of all.
Friendship is really important in my life, and seeing Zoey treat her friends like a big poo was just kind of painful to read. You need friends more than anything, and having your friends hate you and turn on you was all her fault and just stupid of her.
I am NOT looking forward to read the next one.
Posted by Aneta at 6:15 PM