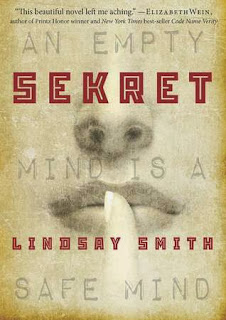 Goodreads Review : Yulia’s father always taught her that an empty mind is a safe mind. She has to hide her thoughts and control her emotions to survive in Communist Russia, especially because she seems to be able to read the minds of the people she touches. When she’s captured by the KGB and forced to work as a psychic spy with a mission to undermine the U.S. space program, she’s thrust into a world of suspicion, deceit, and horrifying power where she can trust no one.
She certainly can’t trust Rostov, the cruel KGB operative running the psychic program. Or handsome Sergei who encourages her to cooperate with the KGB. Or brooding Valentin who tells her to rebel against them. And not the CIA, who have a psychic so powerful he can erase a person’s mind with his own thoughts. Yulia quickly learns she must rely on her own wits and power to survive in this world where no SEKRET can stay hidden for long.

My Review : Yulia and her family are on the run! Hiding from the KGB forces in Russia, and treating poor injured people with smuggled drugs. Its not long before Yulia and her family are captured. Their father is on the run, her mother is brainwashed and forced to work, and her brother is put in a mental home. Yulia is stuck in an old building running the Psychic Program. Yulia and the rest of the household poses the power to read others minds, whether by touch, seeing into the future, or completely wiping out someones memory. If Yulia doesn't co-operate, the KGB will do far worse things to her family that she could ever imagine. Will she attempt to flee, or will she become a spy for the KGB forces?
Such an interesting book, filled with history, power and love. This book started out a little slow, but it definitely picked up mid-point in the "romance" and "action" aspects of the story. There was tons of twists and turns that always kept you guessing. Who was good? Who was bad? Who can you trust?.. I am very pleased with the way this book ended. It had the perfect ending, no cliffhanger that makes you die waiting for the next book, but you could definitely tell that the sequel will be interesting. I loved the Russian words incorporated in the story line, I personally loved them because I could understand most of them, but for all of you who don't understand the basics of the language, I would highly recommend having google translator open up beside you when you read, there's not too much that you'd have to translate, just a few words here and there, but it would definitely make the story better. Same with the Russian history, I feel like people who don't know the history very well, would either have to read up on it, or they just wouldn't enjoy the book as much.Either way, this was a great read, and I would definitely recommend it to the Russian lovers, and fantasy geeks like me!