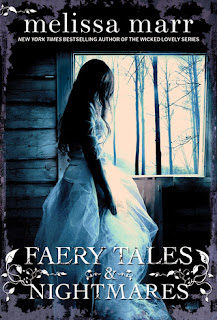 Goodreads Summary : Dangerous promises and beguiling threats swirl together in a dozen stories of enchantments dark and light by New York Times bestselling author Melissa Marr. Uncanny and unexpected creatures appear from behind bushes, rise from beneath the seas, or manifest from seasonal storms to pursue the objects of their attention—with amorous or sinister intent—relentlessly.
From the gentle tones of a storyteller’s cadences to the terror of a blood sacrifice, tales of favorite characters from Marr’s Wicked Lovely novels mix with accounts of new characters for readers to fall in love with...or to fear

My Review : A collection of short stories written by Melissa Marr.
I had different opinions about each short story, but most of them were pretty bad. The short ones were either too long, or so short that i didn't know what was going on. The longer ones weren't that good, i don't know if it was the lack of story for me, but i just couldn't get into it. Would not recommend if you don't like short stories, or Melissa Marr's writing.
Posted by Aneta at 12:12 PM