The Iron King by Julie Kagawa 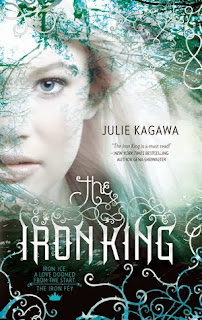 Book One in the Iron Fey Series

Goodreads Review : Something has always felt slightly off in Meghan's life, ever since her father disappeared before her eyes when she was six. She has never quite fit in at school or at home.
When a dark stranger begins watching her from afar, and her prankster best friend becomes strangely protective of her, Meghan senses that everything she's known is about to change.But she could never have guessed the truth - that she is the daughter of a mythical faery king and is a pawn in a deadly war. Now Meghan will learn just how far she'll go to save someone she cares about, to stop a mysterious evil, no faery creature dare face; and to find love with a young prince who might rather see her dead than let her touch his icy heart.

My Review : Meghan Chase is a normal girl. Ignored by her classmates. Ignored by her parents. The only person who really pays attention to her is her best friend Robbie. Meghan's life is pretty normal, until the day she sees a stranger watching her from a far. When she finds out her brother was taken into a mythical fairy world called the Nevernever. Desperate to find her brother, she travels with her best friend Robbie, who reveals himself to be Robin Goodfellow, also known as Puck from Shakespeare's A Mid Summer Nights Dream.
This strange new world is filled with magical creatures, strange talking cats, kings, queens, and odd fey. The adventure never ends.This world is so beautifully written. Every description just paints a vivid picture. And the relationships between the characters are just great. I love Meghan as a character, coming into a strange world, she is scared, but quickly learns to adapt and how to deal with the tricky fey and dangerous creatures. She is smart, beautiful and charming. And lets not forget the two male characters. Puck is so protective and loving, how could you not love a guy who can make you laugh and protect you from danger at the same time. And then there's Ash. Hes the Winter Prince, strong, handsome, and intelligent. I have loved him right from the start.This was just the perfect book, it had the perfect amount of action, love, and magic.Beautifully written.
Posted by Aneta at 5:53 PM