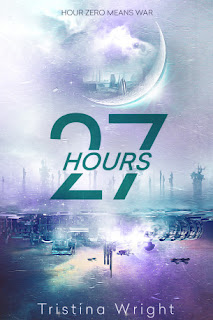 Synopsis: Rumor Mora fears two things: hellhounds too strong for him to kill, and failure. Jude Welton has two dreams: for humans to stop killing monsters, and for his strange abilities to vanish.
But in no reality should a boy raised to love monsters fall for a boy raised to kill them.Nyx Llorca keeps two secrets: the moon speaks to her, and she’s in love with Dahlia, her best friend. Braeden Tennant wants two things: to get out from his mother's shadow, and to unlearn Epsilon's darkest secret.They’ll both have to commit treason to find the truth.During one twenty-seven-hour night, if they can’t stop the war between the colonies and the monsters from becoming a war of extinction, the things they wish for will never come true, and the things they fear will be all that’s left.27 Hours is a sweeping, thrilling story featuring a stellar cast of queer teenagers battling to save their homes and possibly every human on Sahara as the clock ticks down to zero.

My Review
I was extremely happy to receive an early copy of this book, especially after hearing so many great things about it. Unfortunately this did not end up being the book for me.

When the human race travelled to an abandoned moon, the first thing they did after colonization was build a lake. What they didn't know, is that during their building, they flooded the nest of the Chimera, an ancient species that has lived on this moon for many years. The war between the two species over the land has gone on since the beginning, but when the Chimera attack Hub2, Rumor ends up being the only survivor, and he relays the message that everyone in his colony are dead, and the rest of the Chimera will start a war within the next 27 hours.

This book was so good... yet so bad at the same time. It definitely had huge potential and possibly with a few minor changes, this book could have been even better. Lets break the reasons down.

The characters. This book follows four points of view. Three boys and one girl. Three colonists and one member of the human group living in the forest that is neutral between the war. Right off the bat, it felt really weird to have four points of view, without having at least one of them actually be a chimera/gargoyle, so we only get to see their side of the story from the colonists/forest group's point of view.
The thing I really liked about these characters was the diversity. Each main character is so unique and different, not only based on their background, but also on their sexuality. While I'm not a member of the glbt community, which means that my opinion here may not be the best, I really enjoyed the diversity of the main characters, and I thought that this part of the story was very well written.
On the other hand, I couldn't find myself actually get connected with any of the characters. The way the author wrote about the characters and what they were doing, they just didn't feel like real people to me, I couldn't connect with any of the characters, they just felt very flat. The POV was switching so rapidly that they all eventually just blurred into one, and I found myself forgetting who's voice I was reading in. I think, with a little more time and effort into each character I could have enjoyed it a lot more.

The world-building is where I had the most problems with this book. So this story is set about 200 years into the future, and it is set on a "moon" where it is light for 27 hours and then dark for 27 hours. The author has mentioned multiple times that the colony of humans on this planet has over the years merged into one. There are no races, no discrimination against skin colour, and everyone eventually learned a common language and now this is the only language that the humans speak. Having said all this, the book focuses a lot on ethnicity and where each character comes from, and while its not passed off in a racist way, it is still very important to the characters. To me, it seems like either the author got lazy in descriptions and just chose describe their characters as "half Nigerian and half Portuguese" to make it easier for herself, or this "world" that she's created has some major flaws in it.
The second thing that I absolutely could not stand about this world was the colonization part. You're telling me that a race of humans, which in 200 years is able to find a habitable planet, find people and technology to travel there and create cities in that short amount of time, has completely forgotten their history on Earth about colonization? These people must have obviously been extremely smart, since they were able to do so much in such little time, yet its like they've never had a history lesson in their life. The humans on this planet have completely colonized the land, and basically taken it away from the Chimera which have lived there for much longer. Ie, basically how Europeans colonized the Americas. Every history lesson will teach you that eventually the indigenous community fought back, and tons of lives were lost. The worst thing is, is that the humans on this planet are completely oblivious to what they have done. They treat the land like it belongs to them, and rather than trying to make peace with the Chimera, or at least respect their culture, they chose to act in war and portray the Chimera as monsters that must be killed on sight.
One last note on the world-building/writing. This book contains a lot of current day humor, such as slang and even some meme jokes that are currently in our pop culture. This makes no sense to me, especially since this world is set 200 years into the future. Once again, either the author was very lazy and didn't want to create her own slang/jokes, or the editing team didn't notice that the language the characters used did not fit the time frame of this story.

The pace of this story is another area where I had problems with. The action in this story starts right away, like definitely within the first 5 pages of the story. While I usually like action to start early on in books to make it entertaining, this was just a bit too early. I would have at least liked to learn more about the characters before everything happened.
With a beginning like this, I assumed the story will be action packed and keep the reader entertained throughout the whole story, and while I was right about there being tons of action, I wasn't engaged in the story at all. I think this was mostly because I couldn't connect to the characters and the fact that the writing style of the author contained excessive descriptions and lots of unnecessary details. After a few chapters I found myself skimming sections just to get to the dialogue, and only pausing during the important parts of the story.

Overall, I still want to give this book two stars because I think this book can be really important due to its huge range of diversity. If you're interested in this book, borrow a copy first and if you find yourself connecting with the main characters and enjoying the story after a few chapters then keep reading, otherwise I'd recommend just giving up, because if you don't like the beginning, then it will not get better for you.