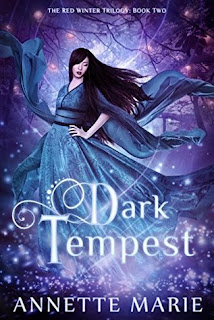 Synopsis: Emi has dedicated her life to becoming the perfect vessel for the goddess Amaterasu, but the insidious betrayal of another deity has changed everything. Now Amaterasu has charged Emi with an urgent mission: to find and free the earthly gods before mankind is brought to its knees beneath divine tyranny.
At her side is Shiro, the mysterious fox spirit. When she first saved his life, she could never have imagined that behind his cunning and confidence, he was lost—his power bound by a devastating curse and his memories obscured. His veiled history is somehow tied to the missing gods, but he can't remember how or why.
As their search leads them into the murky depths of the spirit realm, the shadows of Shiro's past begin to emerge. With each brief awakening of his true self, she loses a little more of him. The fate of the heavens and earth rest in her mortal hands, and she must find the missing gods before time runs out for her world—and for Shiro.

My Review
Dark Tempest was addicting, beautiful and has the most unique characters. I honestly can't begin to tell you how amazed I am with this book.
Amaterasu has given Emi a mission. Find and free the kunitsukami so they can destroy Izanami before she destroys Earth. Emi, Shiro and Yumei are ready to get started on their mission, but without any leads they don't know where to begin. Emi ends up going back to the shrine to talk to her elders to tell them about her mission and see if they know anything. When Emi realizes that her elders have taken the mission upon themselves and plan to keep Emi locked away, Emi plans an escape with Shiro and Yumei, with a lead on where to find their first kunitsukami.
Everything I originally had a problem with in the first book, was magically fixed. Making this probably one of the best fantasy books I will read this year.
I did NOT like Emi at all in the beginning of the first book. Yet in this book, I have completely changed my mind about her, her character development was crazy and I honestly admire and respect her now. Emi went from being a fragile, weak human girl who is very proper, follows the rules and is afraid to do basically everything, to a strong female character that is not afraid to travel and fight with the big guys, and even though she's still human, she knows how to channel her powers and use that to her advantage to help the yokai when they need her help the most. Emi's character development has seriously left me speechless, I've read countless books and I've never seen character development like this before. Annette did such an amazing job with Emi.
Shiro!! My favourite character in this series. I was so happy picking this book up, because I really missed Shiro and his sassiness. What I loved about this book especially, was finding out bits and pieces of Shiro's past and how he was before the oneju beads were on him. I feel like it made his and Emi's relationship even stronger and it was so wonderful to read about.
The action in this book was to die for. The first book had a really long period of boringness in the beginning, but definitely not this book. There was action from the beginning of the book, and when you got about half way in, there was so much action that I could not put the book down. It truly was captivating and addicting.
Overall, I'm simply amazed how well this book turned out. If you haven't read the first book yet, I highly recommend starting this series, and if you've already read the first one, then I promise you that you will love this one even more.
Happy Reading,
Aneta
Posted by Aneta at 1:00 AM