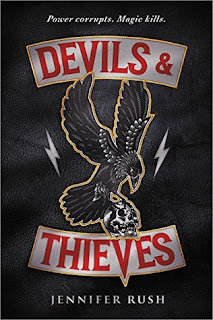 Synopsis: Eighteen-year-old Jemmie Carmichael has grown up surrounded by magic in the quiet town of Hawthorne, New York. In her world, magic users are called "kindled," and Jemmie would count herself among them if only she could cast a simple spell without completely falling apart. It doesn't help that she was also recently snubbed by Crowe, the dangerous and enigmatic leader of the Black Devils kindled motorcycle gang and the unofficial head of their turf.
When the entire kindled community rolls into Hawthorne for an annual festival, a rumour begins spreading that someone is practising forbidden magic. Then people start to go missing. With threats closing in from every side, no one can be trusted. Jemmie and Crowe will have to put aside their tumultuous history to find their loved ones, and the only thing that might save them is the very flaw that keeps Jemmie from fully harnessing her magic. For all her years of feeling useless, Jemmie may just be the most powerful kindled of all.

My Review
Devils & Thieves is the perfect halloween read.
Jemmie believes she's allergic to her own magic but it doesn't bother her too much, well maybe the fact that one of the reasons her father left was because she didn't live up to his expectations. Jemmie's father and her best friend Alex's father created the Devils, a group of "kindled" that can perform magic and chose to work together. Last year, Alex's father was killed, and the role of leader went to her older brother Crowe, who just happens to be to boy that Jemmie has been in love with for years. When a festival rolls around for all kindled in America, people start to go missing, and Jemmie holds the power to help find these people, but first she has to face her problem of using her magic.
I really liked Jemmie as a main character. All her life she's been the shy, quiet girl that doesn't mind hiding behind her best friend's spotlight. She doesn't care to be exceptional, she just wants to be considered normal. I liked her personality from the beginning, but I definitely liked her a lot more closer to the end of the book. She went through a huge character development, and it was really exciting to read in her point of view.
It's been a while since I've read a book that had a love triangle. While this book did have one, it was definitely one of the love triangles where you know exactly who the main character ends up with. While I did ship the main romance, I didn't particularly like either of the boys. One of the just seems really weird and creepy right from the beginning, while the other is rude and think he know's best when it comes to Jemmie.
The plot and world-building of this story was fantastic. Jennifer created such an amazing world, it was so wonderful to read about it. The details and the writing were really good. The book was well paced, I wasn't bored at any part of it and there was always something that made me want to keep reading. While the plot was a little predictable, I did question whether my original prediction was right (sadly it was), so I would have liked it a bit more if there were more twists and surprises.
The last page of this book is absolutely crazy. I finished the book with my mouth hanging open. If you start reading this book and don't know if you want to give up or not, definitely read till the end because the last chapter was phenomenal. Having said that, I can't wait till the next book in this series comes out, because after that ending I'm dying to read more.
Happy Reading,
Aneta
Posted by Aneta at 1:00 AM