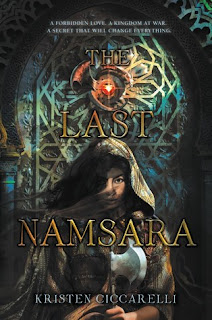 Synopsis: In the beginning, there was the Namsara: the child of sky and spirit, who carried love and laughter wherever he went. But where there is light, there must be dark—and so there was also the Iskari. The child of blood and moonlight. The destroyer. The death bringer.
These are the legends that Asha, daughter of the king of Firgaard, has grown up hearing in hushed whispers, drawn to the forbidden figures of the past. But it isn’t until she becomes the fiercest, most feared dragon slayer in the land that she takes on the role of the next Iskari—a lonely destiny that leaves her feeling more like a weapon than a girl.Asha conquers each dragon and brings its head to the king, but no kill can free her from the shackles that await at home: her betrothal to the cruel commandant, a man who holds the truth about her nature in his palm. When she’s offered the chance to gain her freedom in exchange for the life of the most powerful dragon in Firgaard, she finds that there may be more truth to the ancient stories than she ever could have expected. With the help of a secret friend—a slave boy from her betrothed’s household—Asha must shed the layers of her Iskari bondage and open her heart to love, light, and a truth that has been kept from her.

My Review
The Last Namsara is absolutely fantastic. Amazing characters, tons of action and dragons! Its perfect for all YA fans.As a little girl, Asha was burned by the first dragon. Now she's made it her mission to slay all the dragons in her land, including the one thats burned her. The only way the King will let Asha annul her marriage to Jarek, the man that saved her life, but has continued to make it miserable every day since, is if she kills the first dragon, and brings his head before him. But when Asha's brother asks her to save the life of a slave, and an ancient god visits Asha and gives her gifts, along with special tasks to complete, Asha is running out on time to kill the dragon.. Will she face the wrath of the gods, or will she save herself from a terrible marriage.Asha is such an amazing main character. She is strong, intelligent, sassy and a badass. I instantly fell in love with her from the beginning of the book, and her character development made me love her even more. She has a very strong and determine attitude, and will definitely follow her heart and do something, even though she may be hated for it, or face a prison sentence for breaking the law. It was definitely hard for me to say goodbye to her at the end of the book.There were other fantastic characters, such as her brother, her cousin, and the slave. Every character was so unique, yet crucial to the story. Its not often that secondary characters go through a really impressive character development, but surprisingly a great deal of secondary characters in this book did. I was really impressed with the character development of everyone.As soon as I heard this book had dragons in it, I knew I had to have it. While the dragons definitely made the story better, the fantasy aspect of the story was really well written as well. The whole plot line was so creative, and the addition of the old gods, as well having royals vs slaves, it was all so creative. It's been a while since I've read a book that has incorporated slavery and shown just how horrible it really is, the author did such an amazing job in making it sound realistic, great job.I loved every single aspect of this book, the only thing I would change would be to add a bit more surprises to the story, it was just a tad too predictable. Overall I still really enjoyed it and I can't wait to continue this series.Happy Reading,Aneta
Posted by Aneta at 1:00 AM