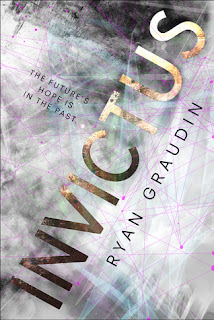 Synopsis: Time flies when you're plundering history.
Farway Gaius McCarthy was born outside of time. The son of a time-traveling Recorder from 2354 AD and a gladiator living in Rome in 95 AD, Far's birth defies the laws of nature. Exploring history himself is all he's ever wanted, and after failing his final time-traveling exam, Far takes a position commanding a ship with a crew of his friends as part of a black market operation to steal valuables from the past. But during a heist on the sinking Titanic, Far meets a mysterious girl who always seems to be one step ahead of him. Armed with knowledge that will bring Far's very existence into question, she will lead Far and his team on a race through time to discover a frightening truth: History is not as steady as it seems.

My Review
Usually I'm not a huge fan of time travel books, but this one is definitely the exception. Invictus was an action packed novel with an amazing group of characters. Everyone knows the McCarthy name. Far's mother is a famous time-travelling recorder, and Far is following right in her footsteps. When Far enters his final exam, he immediately fails. He knows deep down in his heart that someone sabotaged his exam, but there is no way to prove it. The only way Far can become a captain now, is if he joins the blackmarket business.This book had a slow beginning, which is the biggest reason why I ended up giving this book a four star rating. It was really hard to get into the book, especially in the beginning when you're just getting to know the characters. After the initial beginning, once the crew of Invictus starts going on their missions and you get to see the whole squad together, the book really starts to pick up and it gets interesting. I could not put the book down.I absolutely fell in love with this plot. I'm a huge history buff, and seeing the characters travel to places and times that were really important in history. They travel to places like the Titanic before it sinks, Libraries in Egypt, and rescue painting before they were destroyed in World War II. The idea behind the story is just absolutely fantastic, I love the world that Ryan created.Surprisingly, I loved all the main characters in this book. Everyone was so different, yet they all had something about them that made me fall in love with their character. Far was very egotistical at first, I thought that I wouldn't end up liking his character, but later on in the book you get to see the side of him where he shows you just how much he cares about the Invictus family and how he would do anything to save them. I loved Imogen and Gram right from the beginning, she is absolutely hilarious and has such wonderful and positive attitude, and he is just really smart, but also just a well rounded character. I wasn't huge fan of Priya at first, mostly because she was really quiet, but we see her character development later on in the book, and she definitely ended up growing on me. Elliot was the big mystery, she definitely made the book a lot more interesting, her storyline definitely became one of my favourites.What I loved most about this book, was the two sets of romances present. We get the cute "I like you, but I'm too scared to tell you" romance between Imogen and Gram, and the "we've already been in a relationship for a while, but we need to work on it" type of romance with Far and Priya. Both romances were wonderful, but I'm so happy that the author chose to incorporate both into the story. If he just used Far and Priya's romance it would have been too boring, and on the other hand if he just had Imogen and Gram's romance it would have been a bit cliche and boring. Having both romances present just had the perfect balance. Well done.One thing I didn't really understand, was the use of new words instead of swear words. The author chose to use words like Hash, or hashing instead of the typical swear words we use in the english language. This didn't exactly make sense to me, I think the young adult audience could handle light swearing, or if he didn't want to use real swear words why not just not incorporate it into the book.Overall, this book was absolutely wonderful. If you love time travel, history or science fiction then definitely pick up a copy of this book, I guarantee you will love it.Happy Reading,Aneta
Posted by Aneta at 1:00 AM